Last week we attended the official opening of the Singapore International Festival of the Arts 2014, for the opera performance “Facing Goya”. About a woman’s passionate search for the 18th Century Spanish artist Francisco Goya’s missing skull [taken from the bulletin]. 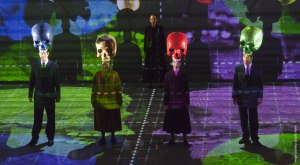 Please visit the website and check out the other performances.

For the first time, I could understand an opera because it was in English.

It was a treat to be in the presence of great talent, from the talented architect who modernised the grand dame Victoria theatre yet incorporating pieces of the old furniture into the panels of the hall. The artistes, director. I’m especially impressed by the set, projection, lighting, costume design transforming the experience of the audience.  The theme was ambitious. If Goya’s skull was found, and his creativity cloned, what next?  “Can we clone the human soul?” reads the bulletin.

The performance started with a historical account on human interest in predicting talent: Greek phrenology. Can the size of your skull and facial features predict your performance and psychological attributes? [Apparently Queen Victoria would have her children’s skulls read by phrenologists.] Craniometry – can your facial angle measure intelligence among species of men?

Science using evidence-based research to promote scientific racism and the superiority of one race over another. Flashes of Hitler and reminders of his Utopia with the Aryan race as the Master race.

The operatic performance set out to tackle a very big topic- “cloning vs the human creative soul”. Yet, the opening scenes, 1st and 2nd Act were pushing towards a difference direction.

Does scientific racism still exist today? In what forms? Does globalisation truly celebrate diversity? Or are we being McDonalised?

1. What is performance (or creativity)? Can we measure it? Can we predict it?  These age-old questions have been asked for centuries. Still relevant today in companies when managers recruit talent into the organisation.

2. What is talent? How do we measure it?

A study by Greg Mankiw, Economics Professor at Havard University, found a positive correlation between height and income. The typical 6-foot American earned $5,525 more than a 5-foot-5-inch worker, after correcting for sex, age and weight. Height builds self-esteem.  http://www.nytimes.com/2007/12/09/magazine/09heighttax.html?_r=0

3. Does height build self-esteem in young people or do we project those qualities onto tall children giving them opportunities along the way?

4. Should we “select” talent for fit or “mould” talent?

I stumbled upon an article by Marina Krakovsky, “The effort effect” on Stanford psychologist Carol Dweck’s book “Mindset: The New Psychology of Success“. (http://alumni.stanford.edu/get/page/magazine/article/?article_id=32124)

Dweck’s work attempts to answer the question: Why some people reach their potential while others don’t. We know from Malcolm Gladwell that its hard work, 10,000 hours. (In fact Gladwell noted that some of his research were based on Dweck’s work.)

While it is true that some people have innate talent than others,“the fallacy comes when people generalize it to the belief that effort on any task, even very hard ones, implies low ability,” Dweck says. Dweck highlights the difference between “fixed mindset” and a “growth mindset“. Quoting Krakovsky:

“Dweck’s study showed that praising children for intelligence, rather than for effort, sapped their motivation. But more disturbingly, 40 percent of those whose intelligence was praised overstated their scores to peers. “We took ordinary children and made them into liars,” Dweck says. Dweck explains. Students may know how to study, but won’t want to if they believe their efforts are futile.

Similarly, Enron executives who’d been celebrated for their innate talent would sooner lie than fess up to problems and work to fix them.” (Many companies have a high potential list where the talent is groomed with a career path.)

Some of us may think, “Well this is common sense”.  Not so. A friend recounts the   story of her maternal uncle, born in the year of the Tiger (Chinese Zodiac sign – Tiger is good, scares away bad fortune), told by his father that he didn’t need to study because opportunities would come. The uncle today is uneducated, and has no discipline to pick up any skills. History repeats itself. Her brother tells his children “Work smart and not work hard”.  Fortune telling, face reading is still a roaring business among educated Chinese.

People must of course, want to change.

What then, is talent? A person with some innate ability, values, and the ability to persevere and learn from their mistakes. I find this view very liberating for me. A fixed mindset implies that “nature” goes on its pre-programmed course, once the button is pushed. A growth mindset helps me forgive myself for the mistakes I’ve made, and look on my failures as a learning process. How do I measure success? Not pegged against another person, but whether I’ve learned and grown a little more today compared to yesterday.

“Crouching Tiger Hidden Dragon” is a literal translation of the Chinese idiom “臥虎藏龍” which describes a place that is full of talented or extraordinary people who remain hidden and undiscovered, or simply means “talented or extraordinary people hidden from view. (Wikipedia). In 2000, the term received international prominence as the title of Lee Ang’s martial arts epic. The cinematography and martial arts moves are choreographed in ballet-like manner, which to a Chinese audience familiar with martial arts movie, too  unrealistic. An analogy would be to think about  the speed of the bullet from a cowboy shoot-out in a wild wild west movie. Beauty in the eye of the beholder.