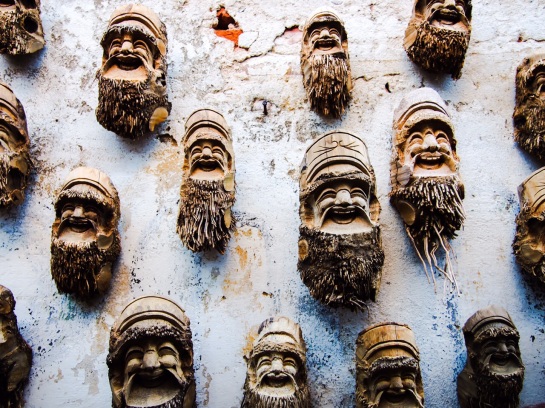 Root carvings along the streets of Hoi An, Vietnam

Yesterday, the Straits Times ran an article on the alarming increase in dementia among the young and old. I was naturally concerned both for my parents and myself. We had a former colleague who was diagnosed with dementia several years ago in his late thirties. With health care costs on the rise, I wonder if there’s anything we can do on our part to delay the onset.

My paternal grandmother suffered from dementia. This was something my father would bring up, possibly a subconscious worry that it’s hereditary.

What’s the cause and cure of dementia? Unfortunately as its a memory loss condition, I doubt it’ll be helpful to ask the “patient” about the onset of the condition.

How to treat this condition? Some websites recommend mental stimulation, exercise and drugs. One study contradicted these claims and concluded that experiments using mental stimulation exercises alone did not abate dementia.

Reading, writing your blog and watching TV is not going to cut it.

Another ST article introduced an experiment by the National University of Singapore on joining the choir. Learning something new and making new friends. I hope this experiment succeeds as this means that joining the church praise and worship should help. http://www.straitstimes.com/singapore/health/sing-in-a-choir-keep-dementia-at-bay

In the case of my grandmother, the onset of her dementia was linked to a period of great stress. She was moved to a different neighbourhood of big fenced in houses where she didn’t know any of her new neighbours. There was a family feud and my extended family didn’t allow us to visit. While the daughters who used to stay with her, got married and moved out.

Anecdotal evidence from friends confirm such patterns of emotional stress, lack of social group and the isolation caused by a new and different environment which reinforced the feeling of isolation and lack of control.

Which may explain why mental stimulation alone doesn’t work. Retirement, leaving your work place and your friends may not be such a paradise after all. While you leave behind the stress of work, you leave behind the familiar and the routine which is necessary for the soul.

Wind back the clock -Mindfulness

In a social psychology experiment by Ellen Langer, she found that turning the clock backward seemed to help her participants behave younger and have improved dexterity.

Langer and her associates got a group of participants in a home decorated with memorabilia of their era. During the time they stayed in the home, they talked about the era as if it’s the present, and even the calendar was turned to reflect that time. Interestingly participants felt more energetic at the end of the experience.

Details of the experiment in the following websites:

Will the singing experiment by NUS work?
1. Very likely. Singing in a choir is very comforting for some people.
Songs have beats, rythum and tempo which provides the familiar and structure.
2. Having a regular social group to go to, gives you something to look forward to. Especially if you enjoy the company after a period of familiarisation.
3. Not to forget mental and physical stimulation of learning a song, and exerting your lungs – good for the emotional and creative soul.

However, it may be difficult to isolate which part of Singing then is helpful for delaying the full effects of dementia. What if you dislike singing or have physically immobile parents who need help getting to a choir practice but you are not able to regularly get them to the group?

Ellen Langer’s experiments suggest that another critical piece to the picture is the illusion of control. In an experiment where she gave a group of patients in a aging home, a plant to care for, they seemed to perform better than the control group.

Critics though point out that no other researcher has since been able to replicate the Rodin & Langer experiment.

What then should we conclude ? There’s no empirical evidence that giving someone responsibility to make decisions slow down the process of aging.

Human beings are complex creatures and we all attach different meaning and interpretation to certain events. Some of us do not like responsibility. Some of us know the stuff but lack the will to change.

As for me, I’ll continue the path of searching. We are unique and different. If an experiment doesn’t harm me or someone else and doesn’t involve consuming drugs, I’ll hold on to the hope of getting better and treating others especially those going through this condition with dignity.

What was really needed was a fundamental change in our attitude toward life. We had to learn ourselves and, furthermore, we had to teach the despairing men, that it did not really matter what we expected from life, but rather what life expected from us.

Life ultimately means taking the responsibility to find the right answer to its problems and to fulfill the tasks which it constantly sets for each individual.

What do you think?