Should I face this with fear ? When I was young, we were told the neighbouring countries are going to eat our lunch. Especially Penang. After all we have no resources. Then I learnt that the “Chinese and Indians are eating my lunch”. Now it’s the robots.

Let’s face it. Someone is always going to eat my lunch. I say this, not to underestimate the enemy. But to plan a strategy. What did I learn from the past which can set me better for the future.

Last week, my 12 year old nephew told me with all seriousness of a very cute and “voice not broken” that 10 million jobs will be wiped out in 10 years time. He learnt this while watching TV.

While we throw these words around, how then are we preparing the next generation? With a doomsday, Armageddon mentality or competitive steak?

I do not have the answer.

Machines replacing the jobs of humans is not a new story. When I first joined the Foreign Service, we had typists in a typing pool. When we tried to lobby countries in the UN to support us for a seat in some UN Council, 185 letters or Third Part Notes had to be typed – such jobs were essential. I could only type all alphabets with one finger. The body of the letters were printed but the typists typed out the names of the countries in 4 places in super human speed. Good luck if the names were typed wrongly. So proof reading was essential because humans make mistakes. We had to beg the typists to prioritise our work and bribed them with gifts and praises. There were never enough typists for the stuff that required typing.

Imagine our elation, when computers, mail merge and excel were introduced. The typists’ jobs were replaced but many of them moved on to other jobs in the organisation. The total number of employees did not go down. In fact more work was created.

Change is part of life. Seasons change, winds change. One of the key skills we need is to embrace change. Mindset of an adventure.

That’s the excuse I gave myself to acquire the Samsung S8+. I was very excited, the day I decided to buy the new phone, fiddling the model in the Samsung concept store and confirming with my telecom provider that stock was available. My preferred color: Orchid Grey.

On the actual day of the purchase, I was first in queue. But when the phone was in my hands. Dread overtook me. Inertia. Why did I buy a new phone with a new contract for 2 years. My Note 4 is excellent, why pay $438 (after the various discounts) just for a curved screen and a better camera.

Every action seemed insurmountable.
The transfer of data and learning how to use the new functions. You can learn everything yourself from YouTube, my friend said.

Well, I paid $38 for the Samsung Concierge and a kind lady walked me through the steps at the Samsung store in Plaza Singapura.

Mel Robbins calls it the 5 Sec rule. When you decide on a new challenge, take action within the first 5 secs or your frontal cortex will kick in. So I went straight to the Samsung Concierge and transfered everything.

My friend told me the story of his father, a former senior official (ie educated and highly respected) who refused to use a smart phone. Why is that an issue? Singapore is moving over to 3G soon and the network will not support 2G. My parents who were not university educated have long since moved to smart phone and WhatsApp. How did they learn? By asking people around them. Because they had to depend on their wits for survival, asking for help has become a skill.

Sun Tzu says it’s important to get a local guide who will show you the way.

In “Humility is the New Smart.” , the authors argue that Humility by “learning and unlearning” and asking questions are the new skills of the Smart Machine Age. Never being afraid to tear down old assumptions and ask those around us who know the way. Although beware of the blind leading the blind. 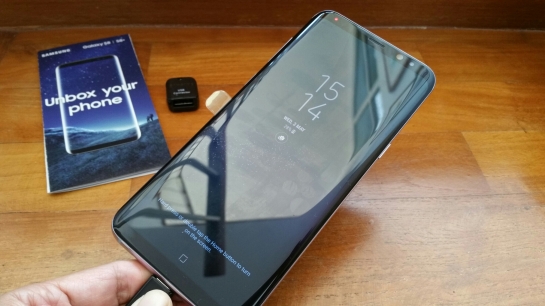 That’s why I bought the Samsung S8+ and the Samsung Concierge service. Learning something new destabilises me and makes me humble. And more empathetic to those who struggle to make sense of this new age.